Shooting pain to the shoulders and arms with local neck pain, tingling and numbness, with loss of fine motor skills in the fingers needs to be treated for Cervical Disc Prolapse. 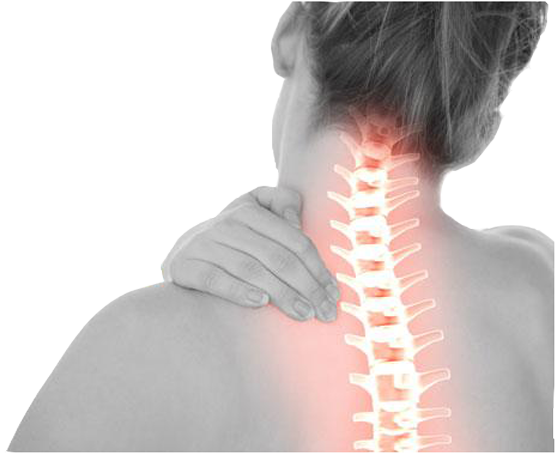 1What are the symptoms of cervical spondylosis?
Symptoms can vary from mild to severe. You may have a flare-up of symptoms if you over-use your neck, or if you sprain a neck muscle or ligament. Symptoms include: • Pain in the neck. This may spread to the base of the skull and shoulders. Movement of the neck may make the pain worse. The pain sometimes spreads down an arm to a hand or fingers. This is caused by irritation of a nerve that goes to the arm from the spinal cord in the neck. The pain tends to wax and wane with flare-ups from time to time. However, some people develop chronic (persistent) pain. • Some neck stiffness, particularly after a night's rest. • Headaches from time to time. The headaches often start at the back of the head just above the neck and travel over the top to the forehead. • Numbness, pins and needles or weakness may occur in the part of the arm or hand. Tell a doctor if these symptoms occur as they may indicate a problem with a 'trapped nerve'.
2What are these caused due to?
• Pain in the neck region can be caused by a variety of reasons. Different centers in and around the cervical vertebrae are sensitive to pain and problems connected with any of these regions can cause pain. The Periosteum ( The outer layer of the cervical vertebrae), The anterior and posterior ligaments ( the ligaments which run along the vertebrae and stabilize them ), The facet joints ( the joint formed between the sideward protrusions of the vertebrae ) The para-vertebral muscles are all pain-sensitive and any lesions to the above structures are capable of producing pain. • Pain, numbness and lack of sensation in the other areas are produced by problems affecting the nerves that emerge from the cervical region. By far, the most common cause of cervical spondylosis is the spasm of the paravertebral muscles of the neck. • The main causes of these problems are 1) Spondylosis, 2) Herniated inter-vertebral disks, 3) Fibro-myalgia, and myofascial pain syndromes. Though the three refer to three different entities, they are interrelated and often super-imposed. With age, osteophytes, or bone spurs form on vertebral bodies, as the body’s way of attempting an increase of the surface area and stabilizing the vertebral joint. Generally not successful in this mission, the bone spurs can become painful as they put pressure on cervical nerves, and in some cases the spinal cord. And may also result in shoulder pain.

Cervical spondylosis can lead to chronic pain and stiffness in the neck that may also lead to numbness of the upper extremities.

The diagnosis is usually through physical examination and imaging.

Treatment for cervical spondylosis -TYPE A

----------------->> Professionals who spend hours doing desk work or in front off the computers should take small breaks in between and try and do simple neck exercises Some of those neck pains and stiffness which does not improve in spite of exercise and medication are most certainly due to stress. When a person is in constant stress the muscles in the neck goes into spasm and causes pain and stiffness in the neck so it is very important for the doctor to identify the cause and treat it accordingly.

You'll know the minute you arrive this is the place. We are here to surpass your desires.
Make Appointment

Treatment for cervical spondylosis- Homeopathy-TYPE B